Taking care of your double Bs : Healthy Aging For Women’s Breasts and Brains

HomeHormonesTaking care of your double Bs : Healthy Aging For Women’s Breasts and Brains

Taking care of your double Bs : Healthy Aging For Women’s Breasts and Brains

As women age, the change in hormones is inevitable but is also a normal, expected and healthy part of aging. With that said, it’s important for every woman to understand how her hormones fluctuate throughout her life and the risks that hormonal imbalance can impose.

In this post, our goal is to educate women on the role of estrogen on a woman’s body and how it changes over the years, the symptoms associated with estrogen imbalance, how to test for it and some tips on how to keep it in check, depending on the desired outcome on estrogen.

The role of estrogen in a woman’s body:

Estrogen, (which is actually made of 3 types called estriol, estradiol and estrone), is best known for its role in sexual and reproductive development in women’s bodies.

Estrogen is responsible for a large number of processes, such as:

Women in their menstruating years go through monthly fluctuations in their estrogen levels. If those are produced in healthy levels, womens’ cycles should be smooth, regular and with minimal interruption to their daily life and quality of living. It’s when there is excess estrogen that women begin to suffer.

Excess levels of estrogen can present as symptoms, such as:

However, as women begin to transition into peri-menopause and eventually menopause, their estrogen levels begin to decline. This drop in sex hormone production as the ovaries are near retirement, brings it’s own unique set of disturbing symptoms that many women may struggle with.

Deficient levels of estrogen can present as:

When it comes specifically to brain health, estrogen has several effects. It’s no coincidence that 2 out of 3 people who have dementia or Alzheimer’s are women. Both gender and age are a risk factor, putting post-menopausal women as the highest impacted target group.

Estrogen has been shown to help increase the number of connections in a particular area of the brain called hippocampus, which plays a role in memory and certain types of learning. Estrogen has been shown to exert antioxidant effects on the brain, which help in Alzheimer’s prevention, and it is also known to affect the way chemicals such as serotonin, acetylcholine and dopamine (neurotransmitters), are used to send signals throughout the brain. Declining estrogen not only affects women’s moods, which these neurotransmitters help modulate, but also compromise the brain’s signalling systems, which is a known link to Alzheimer’s disease.

With that being said, it’s important to note that it is “normal” for estrogen to fluctuate throughout the month and gradually decline over the years. However, it’s when levels are either too high or too low for a woman’s age, is when there are risks involved and therefore BALANCE is KEY!

How do we assess estrogen imbalance?

The first recommendation is that you familiarize yourself with the symptoms of imbalance as noted above. Don’t assume that just because you’ve had a certain symptom (or a set of them) for years, or even your entire life (i.e heavy periods or PMS), that it means that this is a normal state to be at.

Don’t settle for being told that it’s a normal part of aging to suffer with menstrual or menopausal concerns. It’s important to explore whether the estrogen levels you have in circulation are actually at a healthy level for your age (in which case other hormones or factors could be contributing to your symptoms that need to be explored and addressed) or if it’s at a level that is too high or low for your age.

At the Hormone Rebalance Centre, we have a strong focus on hormone testing because we believe that this is imperative to understanding the root cause of what is going on behind the scenes. We like to use urine testing, which allows us to not only assess the 3 different forms of estrogen, but also all their metabolites.

This shows us how each woman breaks down her hormones in the liver and detoxifies them out of the body (though what is called phase 1 and phase 2 detoxification) and whether she does it through cancer-protective or cancer-promoting pathways. When we know, we can then support her metabolic pathways to offset imbalances and protect the body.

Below is a sample hormone test report of a woman with excess estrogen production and very poor estrogen metabolism, which increased the risk of DNA damage and hence breast cancer: 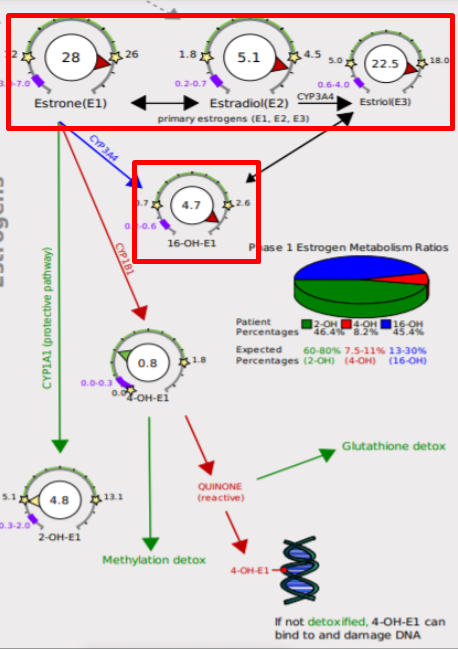 Once you’ve confirmed that you do in fact have an imbalance in your estrogen levels, it’s never too late to tackle it.

If you have high estrogen, detoxifying from estrogen is an important way to ensure that healthy estrogen levels are maintained. Estrogen can quickly build up in the body, thanks in part to the abundance of xenoestrogens in everyday products. To read more about xenoestrogens and how to avoid them, check out our article Can your beauty products contribute to your heavy periods, PMS and high estrogen symptoms? These fake estrogens fool the body into thinking that it has too much estrogen and can lead to symptoms like painful or swollen breasts around your period.

Some of the ways our Naturopathic Doctors recommend detoxifying from estrogen include:

If you’d like to read more about using diet hacks to detox from estrogen, you can find a great article here!

It’s important to note that not every woman is a candidate for boosting estrogen levels. Any protocol for modulating estrogen in the body should be discussed with a qualified healthcare practitioner who understands the risks and benefits and can properly test your estrogen levels prior to implementing such a plan.

Some ways that our team of Naturopathic Doctors may help women support deficient estrogen levels, include:

Overall, while there is a lot of information on the internet about estrogen and the link between estrogen and breast cancer and overall cancer risk, it is important to note that this is why testing is such an important part of treatment! Too little estrogen can have just as much of a negative impact on a woman’s body as too much.

If you would like to learn more about healthy aging, balancing your hormones or working through PMS or menopausal symptoms, please contact us! Learn more about our Signature Hormone Rebalance Program and book a free hormone assessment with our team to discuss your concerns, testing options and whether our treatments are the right option for you!

Thank you, someone from our office will reach out to you soon!

Thank you, someone from our office will reach out to you soon!

Servicing All of Ontario & British Columbia Through Telemedicine!